According to some statistics, about 40 million Americans suffer from hearing loss. This would already be a serious problem but the worst part is that about 10 million can be attributed to noise-induced hearing loss (NIHL). And since this can be prevented, it’s terrible that so many people are still being affected.

Noise-induced hearing loss can be caused either by a repeated exposure to sounds at different loudness levels for a long period of time or by a one-time exposure to loud sound. 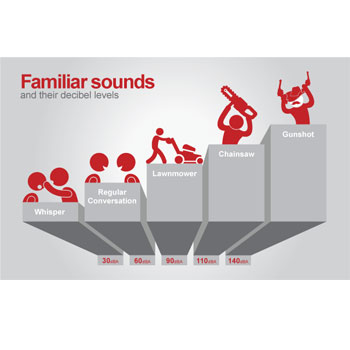 When you’re affected by hearing loss, the damage happens inside the cochlea, on the microscopic hair cells. These cells respond to the sound vibrations by sending to the auditory nerve an electrical signal. The different groups of hair cells are responsible for the different rate of vibrations (frequencies). As you get old, these hair cells tend to get broken or damaged. When there are enough damaged hair cells, the result is the hearing loss.

Make sure to take some time and check out the best headphones based on user reviews. 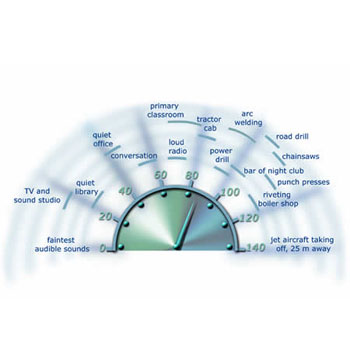 Just like the temperature scale, sound pressure also has a scale and it is measured in decibels (dB). This scale doesn’t start on zero, as you may be thinking. Average people can actually hear sounds at about 0 dB, the sound of the rustling leaves, for example. But there are people who have an extraordinary hearing and they might be able to hear sounds down to -15 dB. On the positive side of the scale, there are some safe decibel levels that are where you should try to maintain.  If some sound reaches, for example, about 85 dB or higher, this can cause permanent damage to your hearing. Usually, the more time you spend listening to this sound, the worse the damage it can cause. When you’re listening to a low sound, you can hear them for as long as you want since you’ll be in the safe decibel levels area.

Here are some common sounds and their respective decibel levels so that you can have a more precise idea about each one:

– A bulldozer that is idling can reach the 85 dB. This is very far from the safe decibel levels and just 1 day of work (8 hours) can cause permanent damage to your hearing.

– A normal conversation between two people usually occurs at 60 dB, which is within the safe decibel levels.

– A gunshot, depending on the weapon, can reach between 140 to 190 dB, and can cause immediate damage to your hearing. 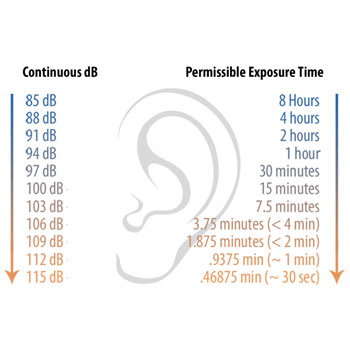 – The clap of a thunder from a storm that is near can occur at 120 dB and it may also cause an immediate damage.

– When you’re listening to your favorite songs with your earphones with the max volume, it will reach more than 100 dBA. This can cause a permanent damage even if you only do it 15 minutes a day.

One of the main problems related to hearing loss that we are dealing with now in the United States is the fact that about 30 million Americans are exposed to harmful sounds at work. And we aren’t even considering the millions of people who put their hearing in danger during their recreational activities like going to a concert, for example.

Just take a look at this hearing loss decibels chart because it really leaves you wondering. You probably never imagined that you were dealing with so many potential hazard sounds during the day. When an alarm clock is so near the 85 dB barrier, you know yo need to pay more attention to this hearing loss decibel charts as well as to similar charts. There’s no question that you’ll suffer from hearing loss as you get older, but you don’t need to be the one causing it.